The Tale of Tsar Saltan | MAMT

The beloved family performance “The Tale of Tsar Saltan” that several generations of young Muscovites have grown up on is coming back to the repertoire of the Music Theatre. Rimsky-Korsakov’s opera “The Tale of Tsar Saltan” was firstly staged in our Theatre in 1997. The spectacular performance was created by director Alexander Titel and artists Yuri Ustinov and Irina Akimova. The premiere was conducted by Ara Karapetyan.

Since then, “The Tale of Tsar Saltan” has been a bestseller for both children and their parents. Adults attend the performance to listen to wonderful soloists of the opera while children are spectating an unforgettable man-made performance. All the characters in the kingdom of Tmutarakan and on the island of Buyan from angels, fish and cows to trees and the city itself are played by chorus and mimance artists in their magnificent costumes.

Three sister are sitting by their spinning wheels in a winter evening. Tsar Saltan eavesdrops their conversation and hears the older sister boast that
if she would become the Tsar’s bride she would prepare a sumptuous banquet. The middle sister then promises to weave a grand beautiful linen. The youngest sister says that if she becomes the happy bride she will give the Tsar a son who will become a knight and a warrior. The Tsar enters and chooses the youngest sister for his bride and the two leave. Aided by the old woman Babarikha, the two remaining sister devise their revenge.

While the Tsar is leading his armies to war, his wife had given birth to a son. However, the young bride is desperate, as no response has arrived from the Tsar to the happy news. Her two sisters, who have become the Cook and the Weaver at the court have already sent the Tsar the message informing him that his heir is actually neither a frog nor a mouse but a very strange animal. Suddenly a messenger from Saltan arrives ordering his people to put his wife and the young boy in a barrel and throw them into the sea. The Tsar’s orders are reluctantly obeyed.

Gvidon grows quickly inside the barrel and he and his mother eventually arrive at the island of Buyan. Gvidon, now a young man, goes to search for food and finds out a swan whom he rescues from a predator hawk. In return the swan promises to reward him. Gvidon learns about his history from his mother, and the swan suddenly magically erects a city shinning like the sun on the idland. Its inhabitants hail Gvidon as their prince.

Gvidon enjoys life in the island but laments the fact that he does not even know his father. The swan promises to help him by turning him into a wasp. Thus, he will be able to fly and reach his father’s palace. The sailors tell the Tsar about the many wonders of the island including the squirrel that sings
beautiful songs. The two sisters of the Tsar’s bride are worried that the Tsar might want to travel and visit the island and try to convince him otherwise by promising to show him a unique and beautiful princess. Gvidon the wasp stings them both and then stings and blinds Babarikha who also tries to
prevent the Tsar’s plans. Saltan decided he does want to visit the enchanted island and sets sails.

Gvidon returns to his island and he now yearns to wed a wife. He tells the swan about the princess he has heard about in the palace and miraculously
the swan transforms into that very princess. Militrisa blesses the happy couple. Gvidon greets his father who arrives at the island, not aware of Gvidon’s true identity, and asks him about his children. The Tsar regrets the way in which he treated his wife long ago, and even though Gvidon tries to cheer him up by showing him the magic of the island, the Tsar cannot be comforted. Now it is the turn of the Princess Swan to arrive and reveal the Tsar’s wife to her husband and everyone else. The two sisters, who have obviously arrived as well, beg forgiveness from the joyous Tsar who happily pardons them. Everyone is ready to celebrate the marriage of Gvidon and his Princess Swan. 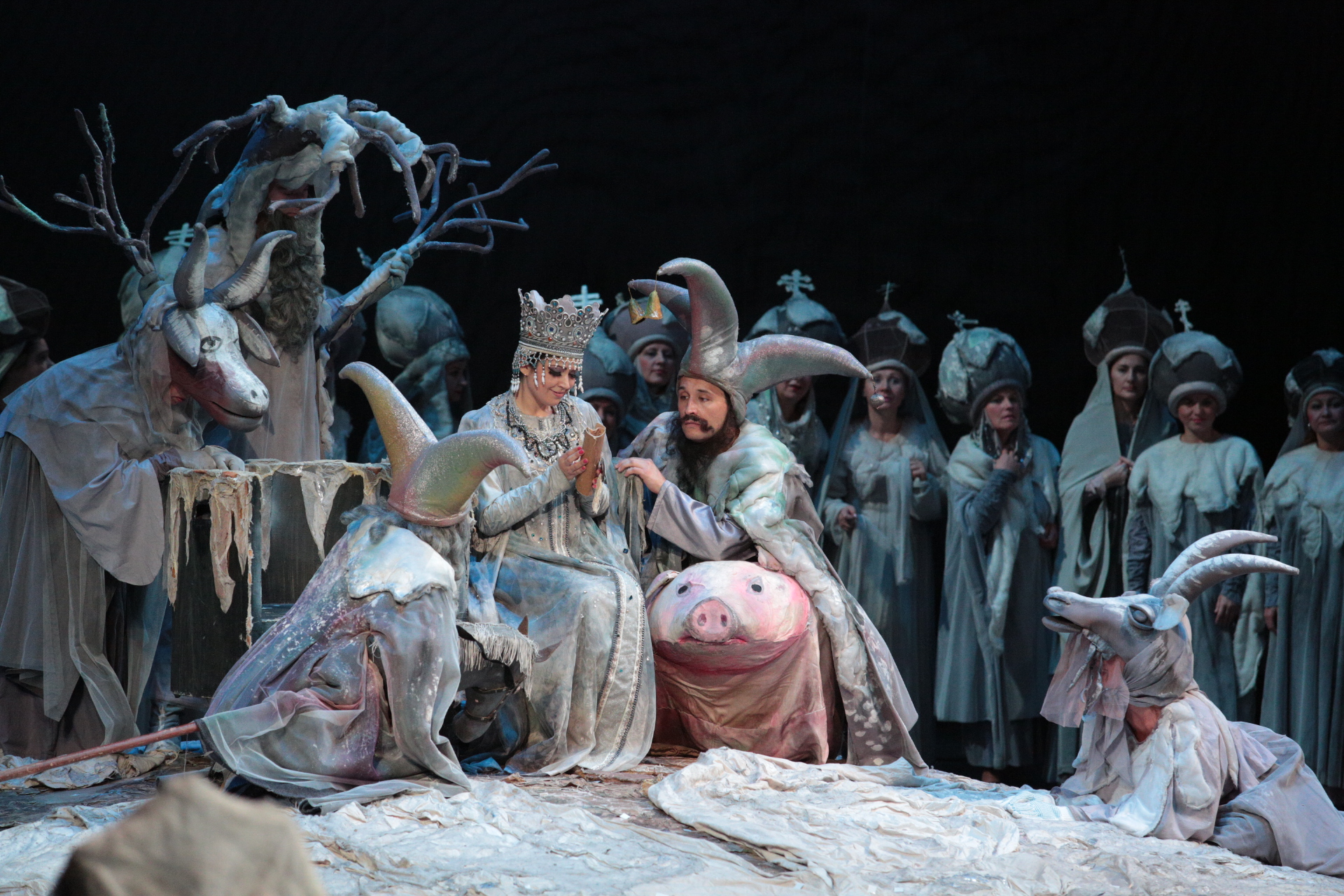 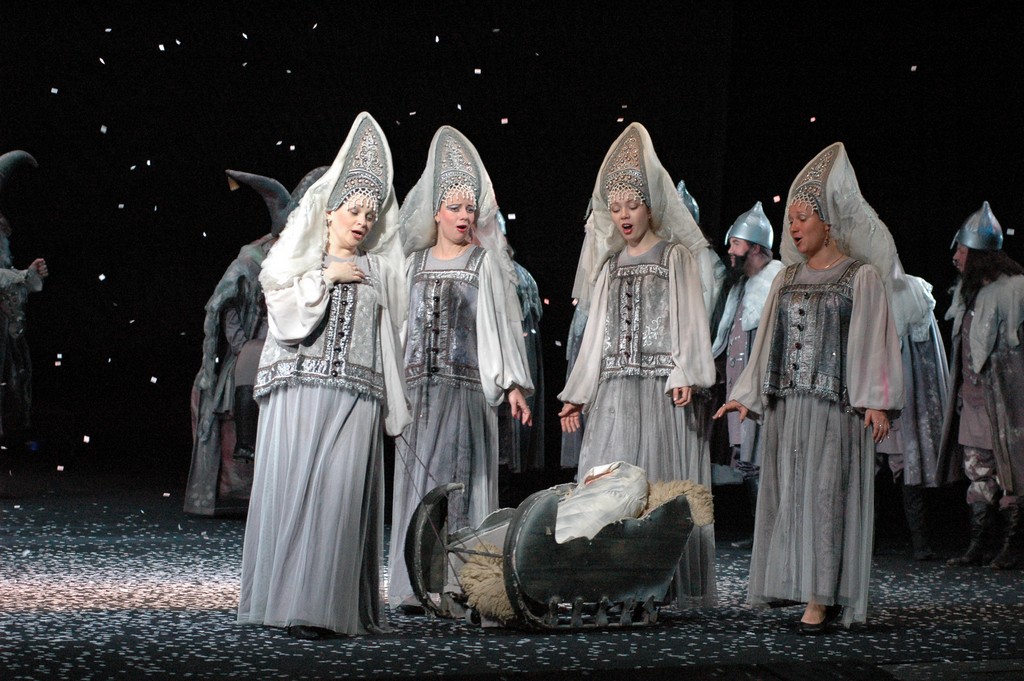 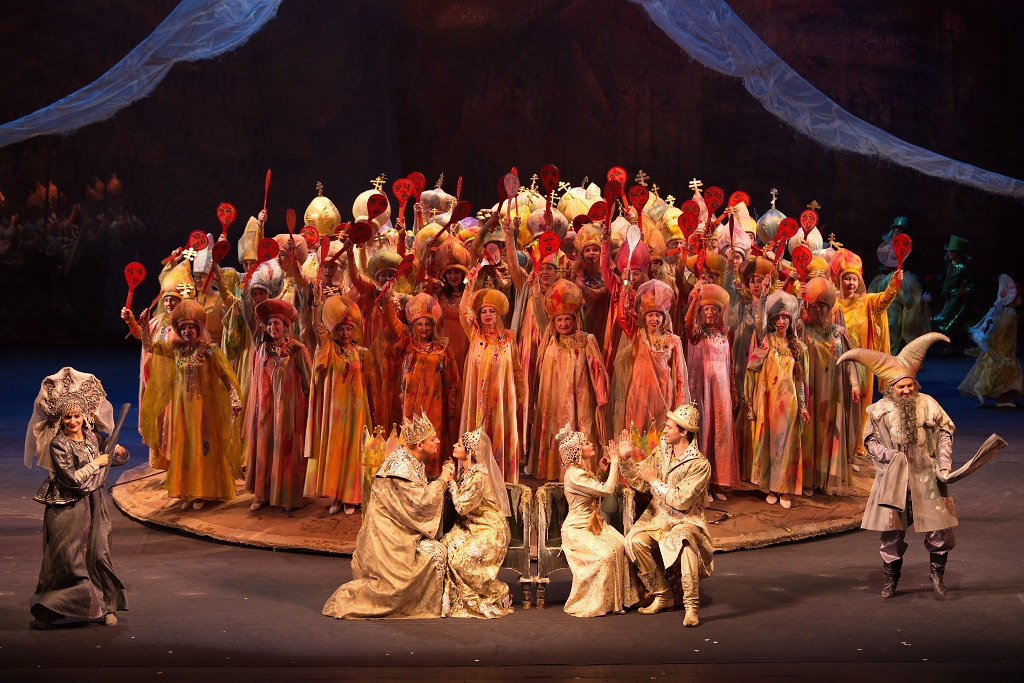 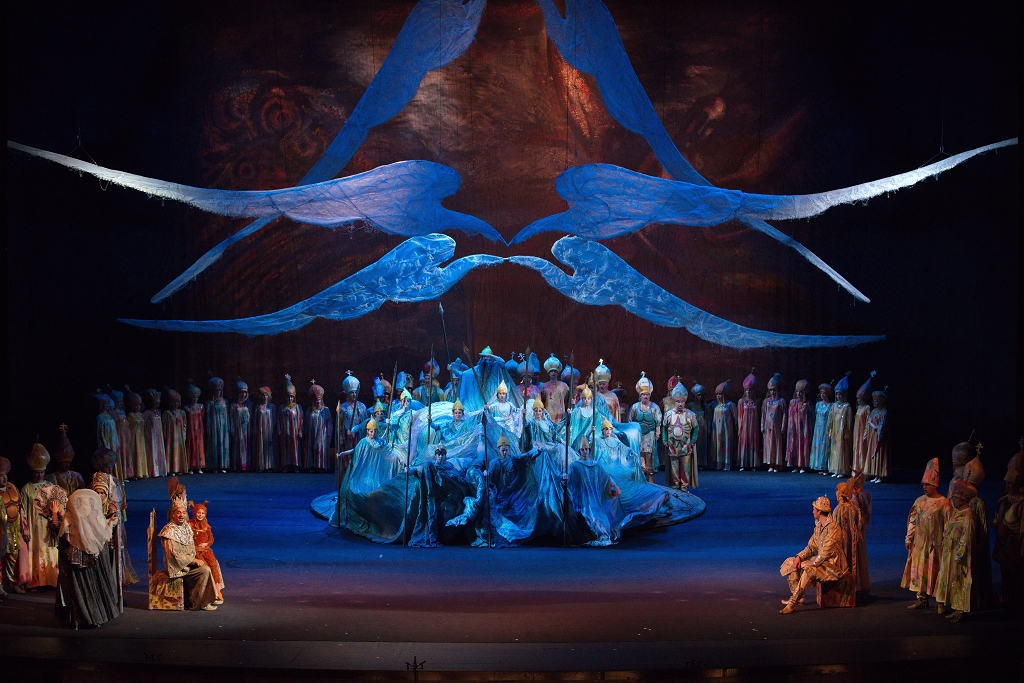 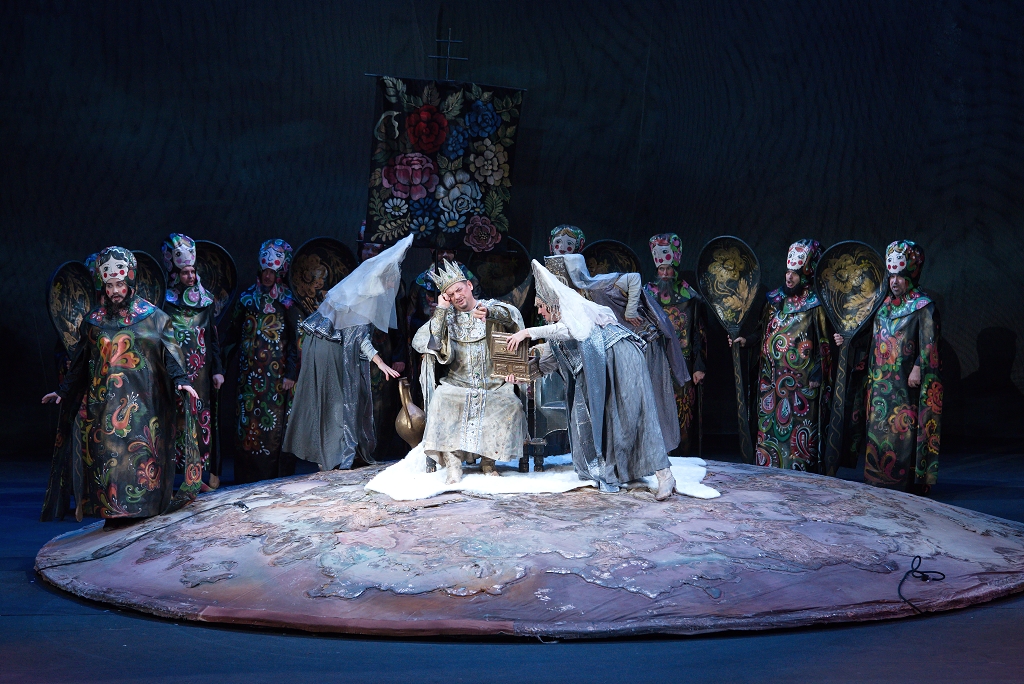 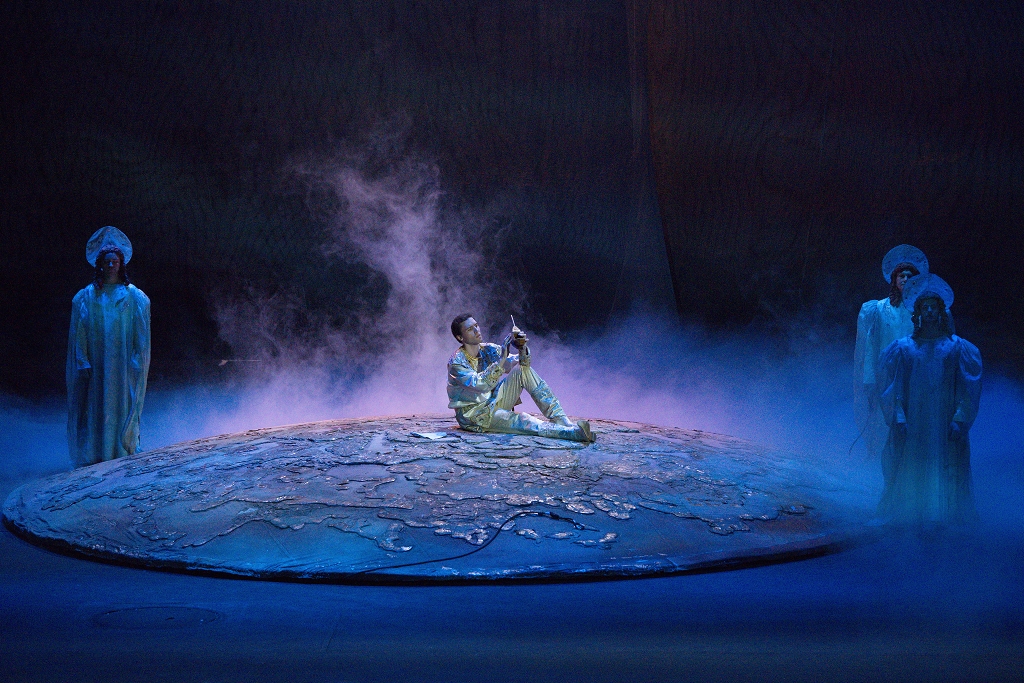 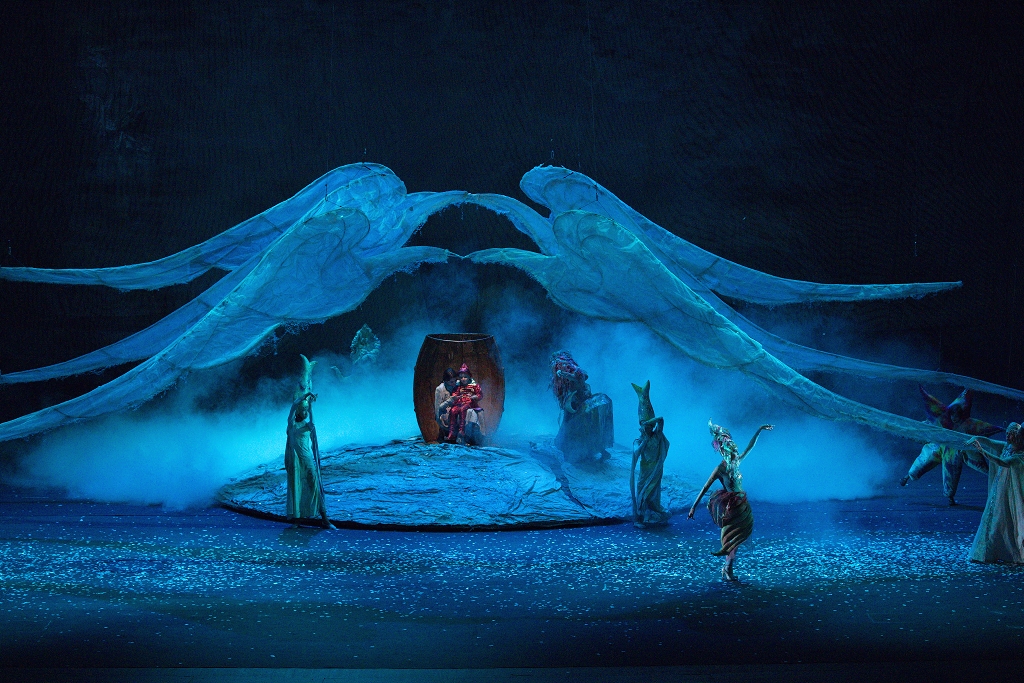