Peter Stein speaks about Aida:
It would appear that the first thought to cross a director’s mind when he takes on staging Aida is try to do everything according to Verdi. Yet for some reason no one does it. We’ve come to believe that Aida – is a grand show with spectacular scenery and costumes, marching extras, preferably even with elephants on stage. And forte, forte, forte all the time! But if we open the score, we will find ourselves looking at a very different picture. The first thing I did was highlighting with red all the dynamic nuances in the score. Need only look at them to realize that more than half of the opera is piano and pianissimo. So why does no one pay attention? Perhaps it is always a challenge for the orchestra to play piano rather than forte. But if we exceed the composer’s volume, the singers will have to force the sound which is dangerous for their voices.

We’ve agreed with the conductor to follow the author’s instructions precisely to turn Aida from a pompous show into an intimate psychological drama as intended. What we have here is a classical love triangle: two women love one man. Everything else – politics, war, religion, and intrigue is just a background against which the action takes place. The love triangle itself has a tragic aspect, and moreover the man chooses the one of the two women that he cannot marry in his status. Amneris belongs to the higher strata of the authorities and Radames is the prominent military leader, one of the elite. But he falls in love with Aida – the slave, the representative of a hostile people. When Radames leads the Egyptian army against the Ethiopian, Aida’s miserable soul is completely confused. Aida is against bloodshed of her own people but at the same time she is afraid for Radames.

The figure of Amneris is nonetheless tragical. She loves Radames deeply and sincerely, but having no success in influencing his feelings she
decides to eliminate Aida which in the end leads to the death of her beloved. Radames lives in a fool’s paradise. In the circumstances that surround
him their happiness with Aida is simply not possible, but he continues to believe in the impossible dream. He unwillingly gives away a military secret and is sentenced to death. The only intervention in the score that we have allowed ourselves was making minor cuts in the ballet scene of the triumph of Egypt in the second act. This scene was added by Verdi as a compromise with the tradition of French “grand opera” implying a possible production of the opera in Paris. But the ballet scene at the room of Amneris was left untouched. It is necessary for the plot development. This is the scene when Amneris realizes that Aida is her rival. The best thing that a director can do here is follow the composer’s score as written. If we start making things up we will fall into a trap. For instance, we’ve decided that Amneris is actually sitting in the café with her girlfriends. And here comes the question – what should we do about the choir that is also in the scene. Then to get Amneris ready for the next scene we have to send the actress to the dressing room to change. We lose time while the solemn march has already started without a pause and we hear its approaching sound. And now let’s try to do it like Verdi has intended: the daughter of the head of the state is going to the ceremony, an official holiday. Surely she is preparing for it putting on the
ceremonial dress. The slaves help their mistress with her dressing ritual. Aida as her main servant appears the last. She carries the final attributes, including the crown. If we do the scene like this and not in any other way, Amneris will be ready to enter the next scene without a delay. The same can be said about the numerous attempts to move the place of action in the classical operas into our time. Why do we believe that this is the only way to make the audience sympathize the characters of the opera, sharing their joy and sorrow? Memory is what distinguishes us from animals – so let us use this privilege. Immersing in the mists of time is no less interesting than watching the lives of our contemporaries. Many centuries ago people have
loved and hated the same way as we do. Historical circumstances may differ but feelings remain unchanged.

The Pharaoh’s palace. The high priest Ramfis tells Radames that Ethiopia is preparing attack against Egypt. Radames hopes to command the army. He is in love with Aida, the Ethiopian slave of Princess Amneris, and dreams that victory in the war would enable him to free her and marry her. But Amneris loves Radames too. She jealously senses his feelings for Aida. A messenger tells that the Ethiopians are advancing. The Pharaoh appointed Radames to lead the army. Aida is deeply conflicted about her love for her country and her love for Radames.

The temple of Vulcan. The priests consecrate Radames. Ramfis orders him to protect the homeland.

Amneris’ chambers. Radames wins a war, and returns to Egypt. Amneris waits for his triumphant return. When Aida approaches, the princess sends away her other attendants so that she can learn her slave’s private feelings. She first pretends that Radames has fallen in battle, then says he is still alive. Aida’s reactions leave no doubt that she loves Radames.

Banks of the Nile. Ramfis and Amneris enter the Temple of Isis to pray. Aida, who is waiting to meet Radames in secret, is lost in thoughts of her homeland. Amonasro appears. He makes Aida promise to find out from Radames which route the Egyptian army will take to invade Ethiopia. Amonasro hides as Radames enters and assures Aida of his love. They dream about their future life together. Radames agrees to run away with his beloved. Aida asks him about his army’s route, and just as he reveals the secret, Amonasro emerges. Radames is desperate about what he has done. Ramfis and Amneris step out of the temple. Amonasro and Aida are able to escape. Radames surrenders to the priests.

The Pharaoh’s palace. Radames awaits trial as a traitor. Amneris offers to save him if he renounces her rival but Radames refuses. He is condemned to be buried alive. Amneris begs for mercy, but the judges will not change their verdict.

The temple of Vulcan. Aida has hidden in the vault to share Radames’s fate. Together they wait for death to come. Amneris weeps in despair. 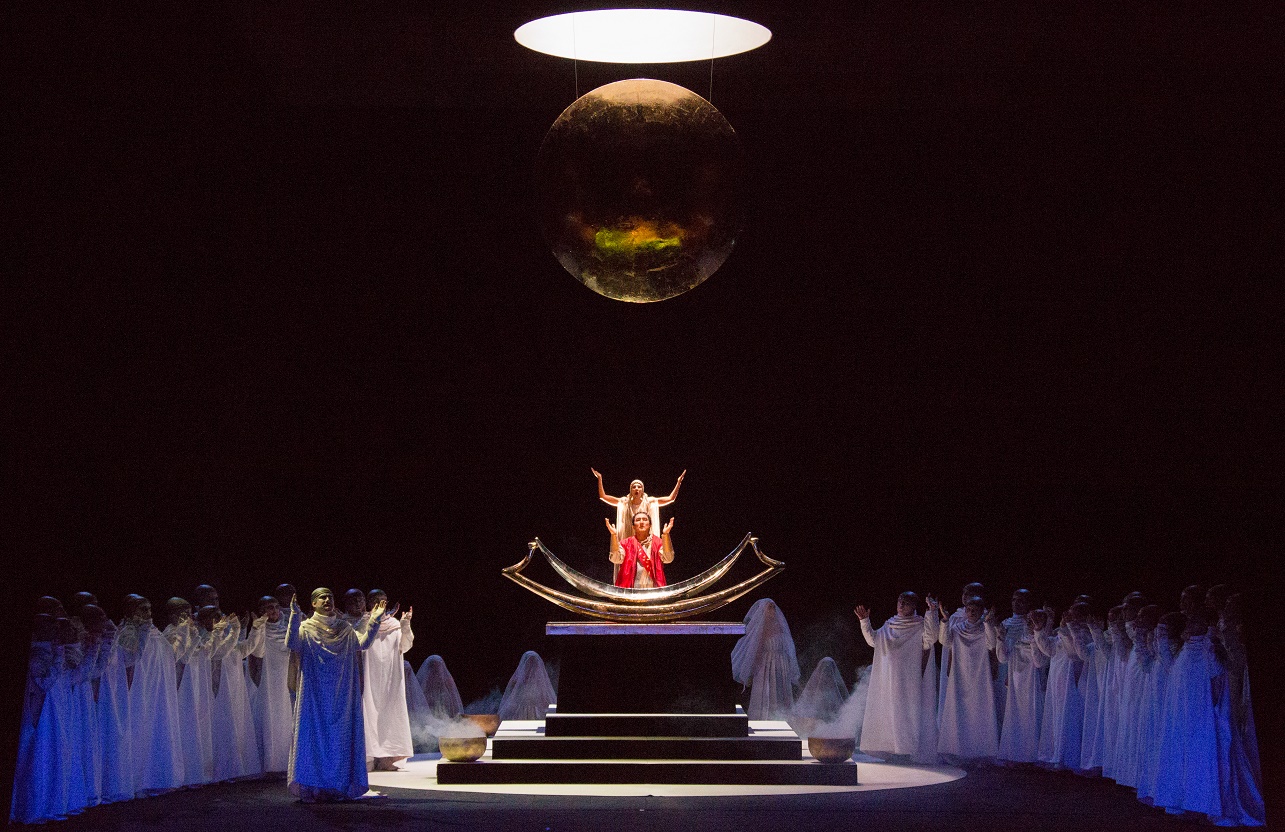 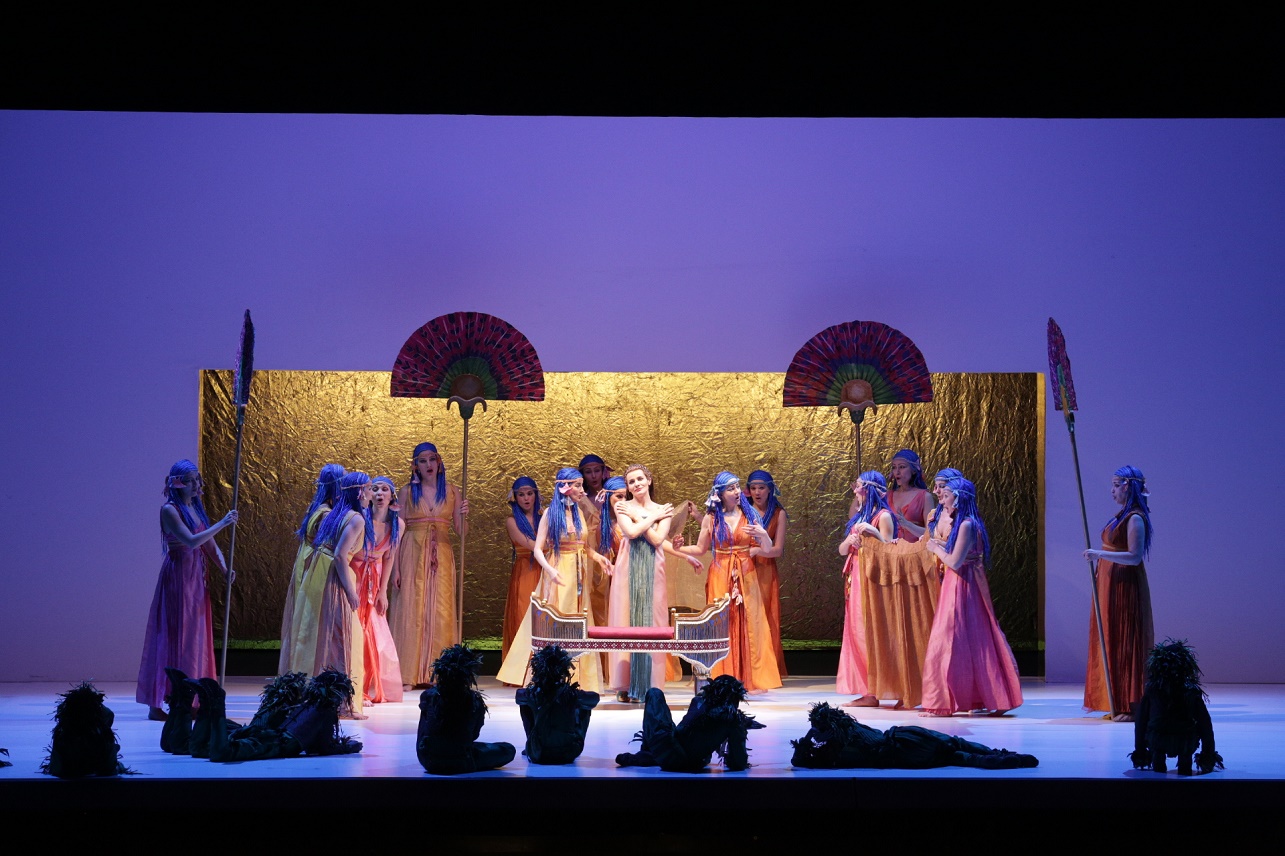 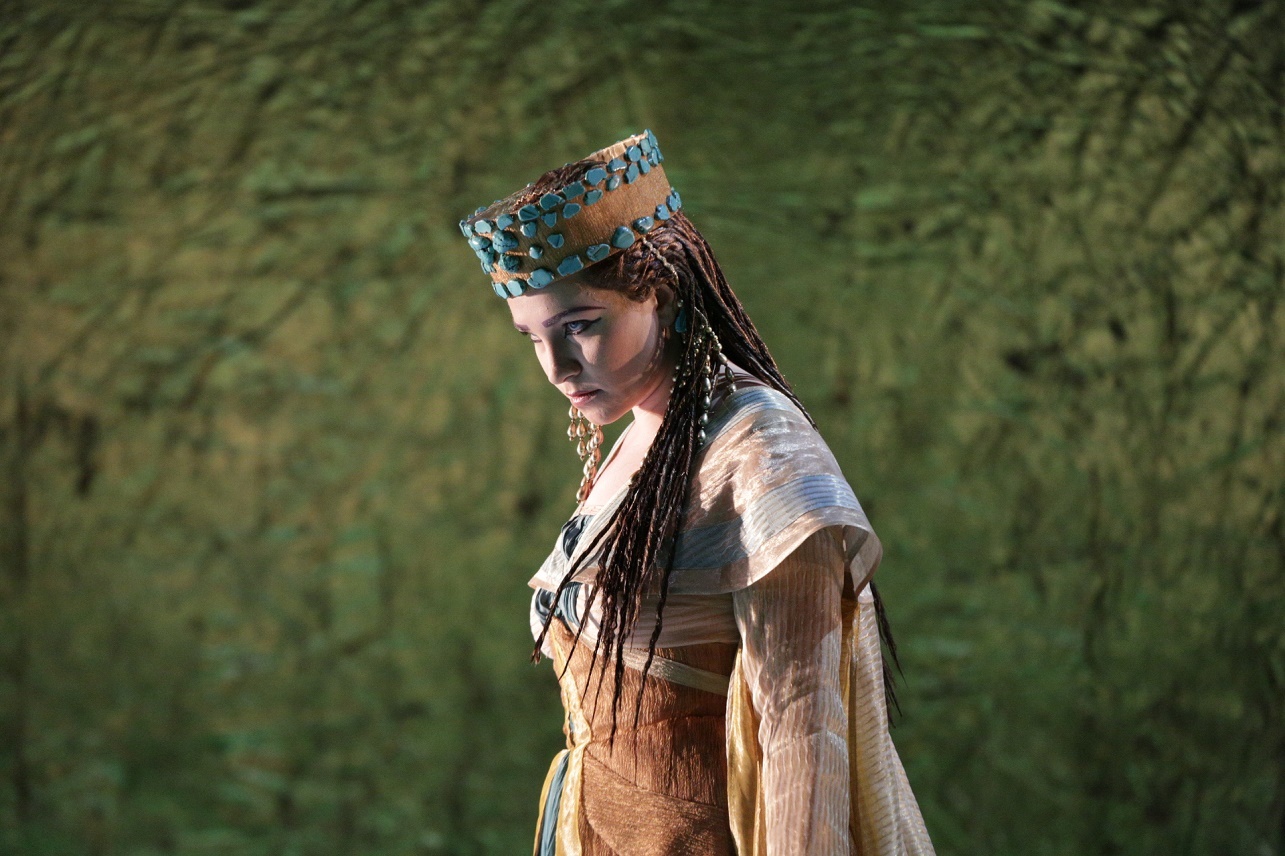 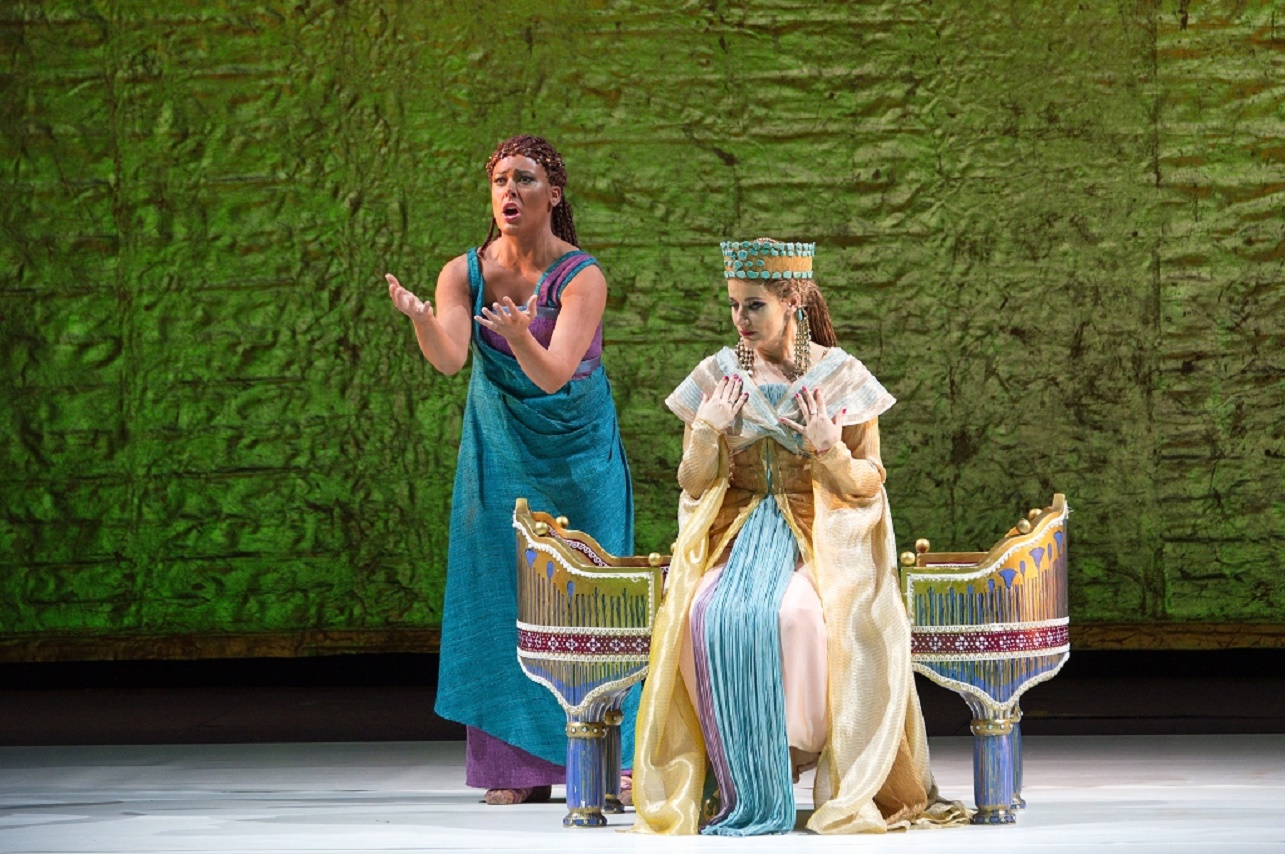 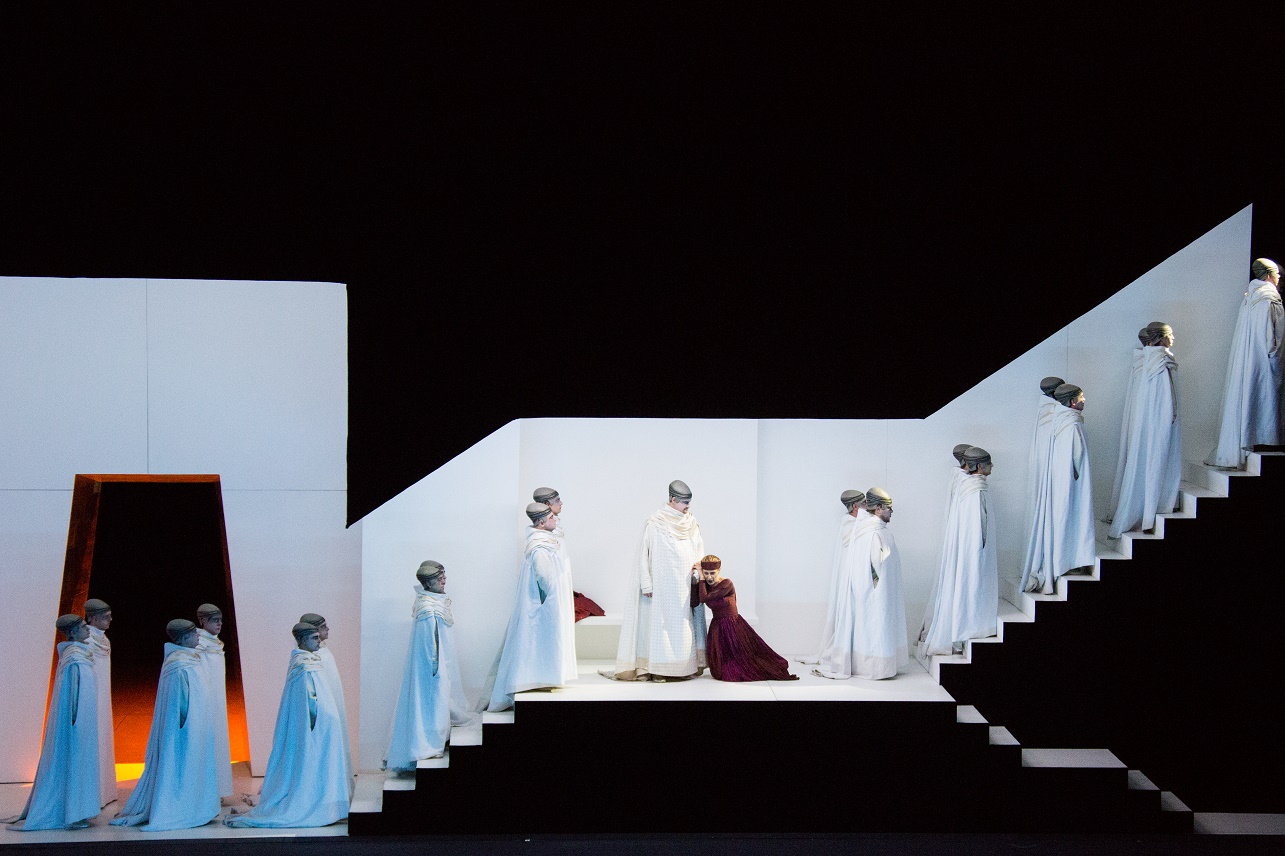