La Bayadère is one of the most famous ballets of the Russian imperial stage. This creation by Marius Petipa to music by Ludwig Minkus and libretto by Sergei Khudekov saw the light in 1877 and immediately became popular. All the great ballerinas have dreamt of dancing the main part, the bayadere Nikiya. It gave a good chance to make a brilliant display of both perfection of the technique and cantilena of the dance. The tragic love story made possible for prima ballerinas of the imperial and later the Soviet ballet to display their dramatic talents in their entire splendor.

La Bayadère’s best adornment is The Kingdom of the Shades scene, which proved an example of sublime harmony on the ballet stage. The scene’s popularity might only be rivaled by, if any, that of the “white scenes” of Swan Lake. All the subsequent versions of the ballet, of which the XX century has seen quite a few, any innovations and alterations notwithstanding, have been made with the intent to keep the original Kingdom of the Shades intact to a maximum degree.

The outstanding ballerina Natalia Makarova staged her own version of La Bayadère in 1980. It is not as pompous or populous as the original yet preserves all the major qualities of the Petipa’s masterpiece. Makarova’s version proved so successful that it has been added to the armories of many a European theatre.

The music score has been made available by Musikverlage Hans Sikorski

Scene 1: The Sacred Forest, outside the temple
Warriors returning from the great tiger hunt are joined by Solor, the noblest warrior in the land. He asks to be left alone to pray before the Sacred Fire, but once the warriors have departed, he calls for the head fakir, Magdaveya, and asks him to arrange a rendezvous for him with the bayadère,
Nikiya. They are interrupted by the arrival of the priests and the High Brahmin who orders Magdaveya to gather the other fakirs to prepare the Sacred Fire for the coming celebration. The bayadères appear, and among them is Nikiya, who has been chosen to be consecrated their leader. The High Brahmin is overwhelmed by her beauty and tells Nikiya of his love for her. Nikiya, however, rejects his attentions for he is a man of God. The High Brahmin is deeply hurt by her reaction to his declaration of love. As the celebration begins, the temple dancers bring water to the fakirs, and Magdaveya informs Nikiya of Solor’s message. Nikiya agrees to meet him, but not before the High Brahmin has seen her with Magdaveya and become suspicious. The ceremony ends and the celebrants return to the temple. Magdaveya calls for Solor and tells him to hide in the forest until Nikiya returns to meet him. She soon appears, and when Solor joins her they swear eternal love over the Sacred Fire. Unbeknown to Solor and Nikiya, the High Brahmin has been watching them from within the temple, and after an uneasy Magdaveya separates the lovers, the High Brahmin emerges in a fury and invokes the gods to help him kill Solor.

Scene 2: A room in the palace

Warriors have been invited to the palace to honour Solor. The Rajah announces that Solor’s reward for his valour will be marriage to Gamzatti. He presents his daughter to Solor, and when he lifts her veil, Solor is overcome by her beauty. Even though he has sworn eternal love to Nikiya, he cannot resist Gamzatti’s attractions nor refuse the Rajah’s wishes. Entertainment is provided for the betrothed couple, which ends with the arrival of the High Brahmin. He asks to speak privately with the Rajah, and informs him of Nikiya’s and Solor’s love. He had hoped that the Rajah would kill Solor, but the Rajah instead decides that Nikiya must die, to the dismay of the High Brahmin. Gamzatti overhears their conversation and summons Nikiya to her rooms. She tries to bribe her to leave Solor by offering her jewels and gifts, but Nikiya refuses. In desperation, she tries to stab Gamzatti, but is stopped by her attendant, Aya. As Nikiya runs out of the room, Gamzatti, like her father, determines to kill her.

Scene 3: The garden of the palace

Festivities are presented in honour of the betrothal of Gamzatti and Solor. The High Brahmin brings Nikiya to dance for the ceremony. She cannot accept the engagement and expresses her sadness in her dance. Aya gives her a basket of flowers which she says are from Solor, and Nikiya’s spirits
brighten. However, a poisonous snake is hidden among the flowers, which were actually sent by the Rajah and Gamzatti. The snake bites Nikiya as she lifts the basket to smell the flowers. The High Brahmin offers her an antidote to the poison, but the moment before she drinks it, Nikiya sees Solor
being led away by the Rajah and Gamzatti, and she decides to die.

Scene 1: Solor’s tent
Despondent and depressed by Nikiya’s death, Solor smokes opium, given to him by Magdaveya to deaden his grief.

Scene 3: Solor’s tent
As the warriors enter his tent to prepare him for the wedding to Gamzatti, the vision of Nikiya continues to haunt and confuse him.

The temple In the shadow of the Great Buddha, a bronze idol dances as the High Brahmin and the priests prepare for the wedding of Gamzatti and Solor. The betrothed couple enter, and the bayadères perform a ritual candle dance around them, reminiscent of the Sacred Fire burning outside the temple. The Rajah, Gamzatti and Solor dance, but Solor is haunted by the vision of Nikiya, which is visible only to him. During the dance, a basket of flowers identical to the one given to Nikiya mysteriously appears, and Gamzatti, terrified and consumed with guilt, urges her father to complete the wedding ceremony. The High Brahmin performs the ceremony on the steps of the altar, when he joins the hands of Solor and Gamzatti the infuriated gods take vengeance for Nikiya’s death by destroying the temple and burying everyone under its ruins. The spirits of Nikiya and Solor are reunited in eternal love 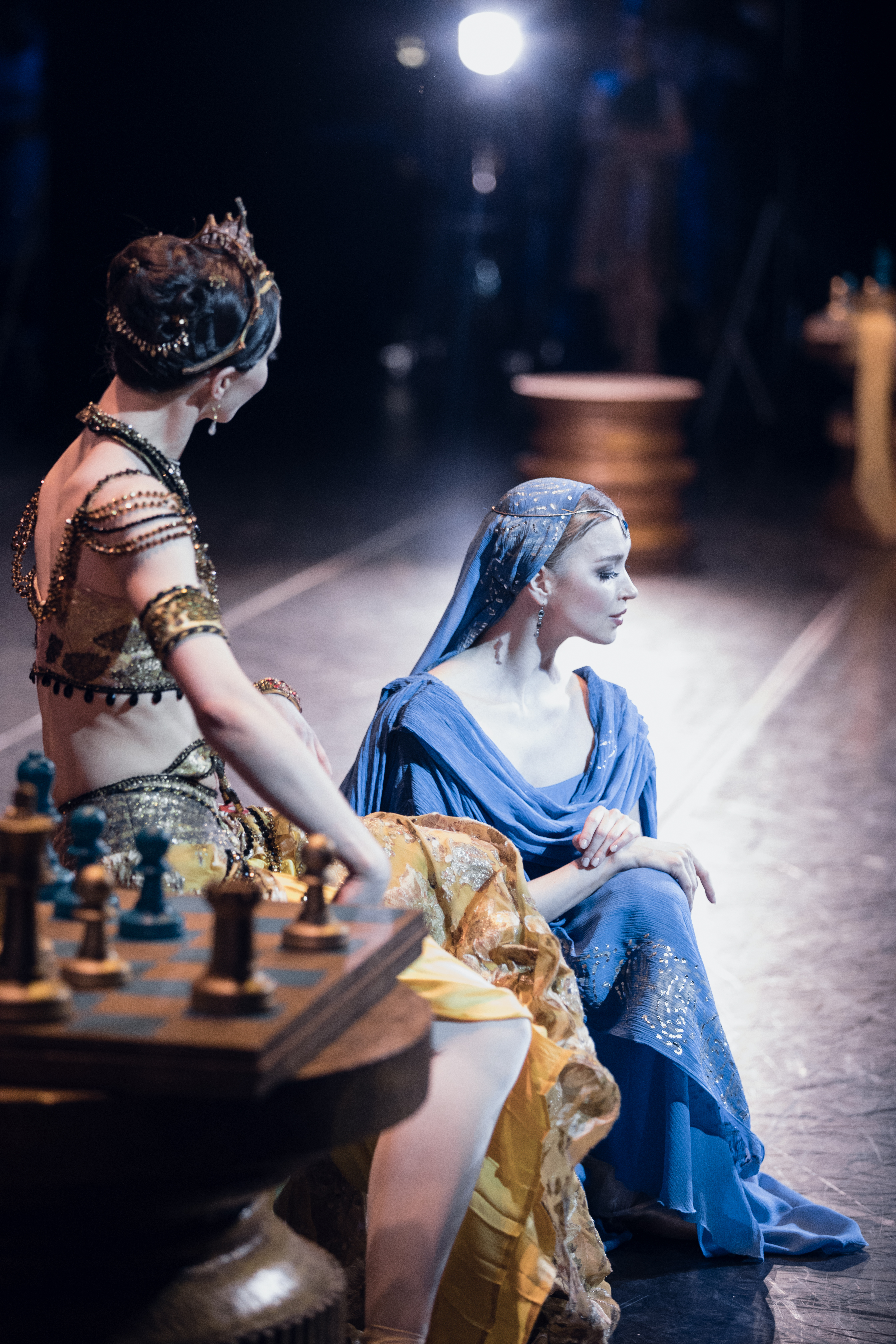 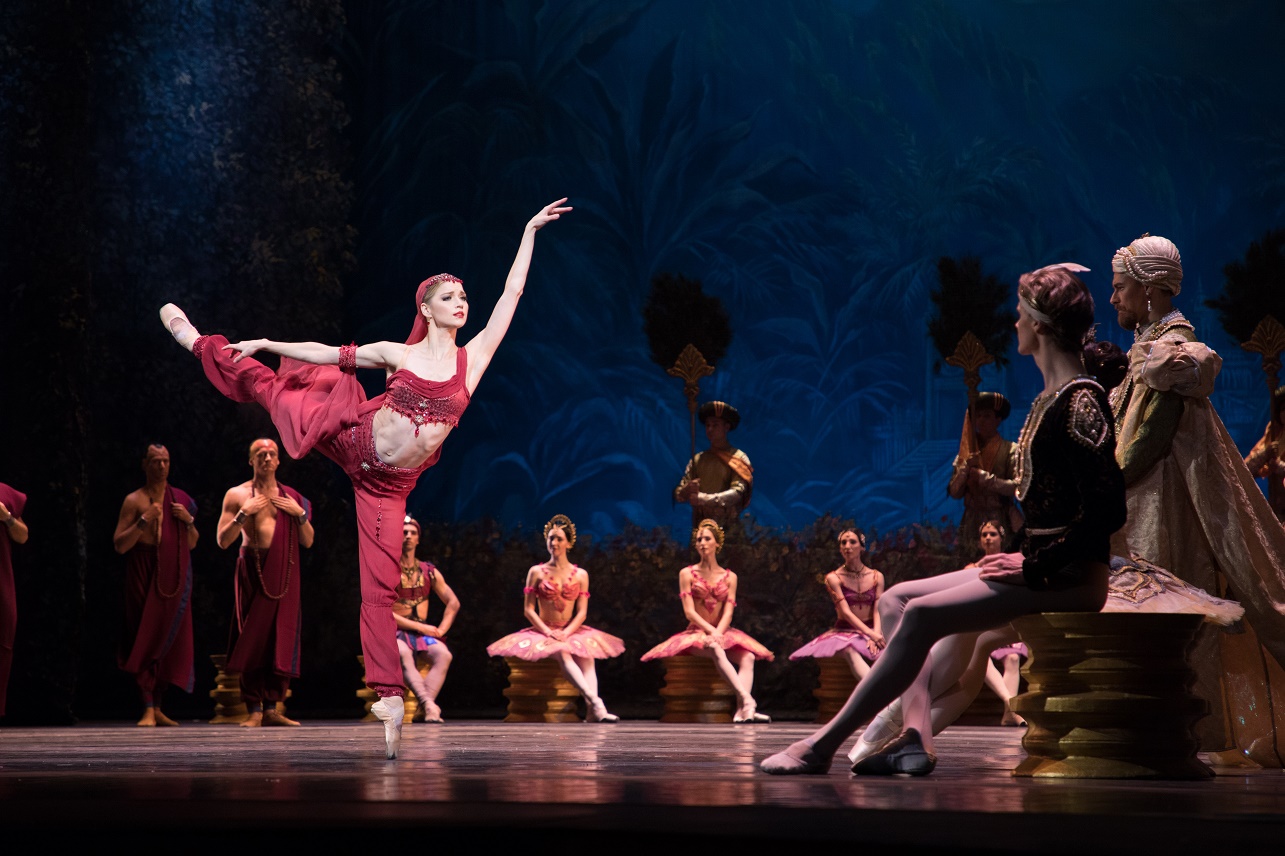 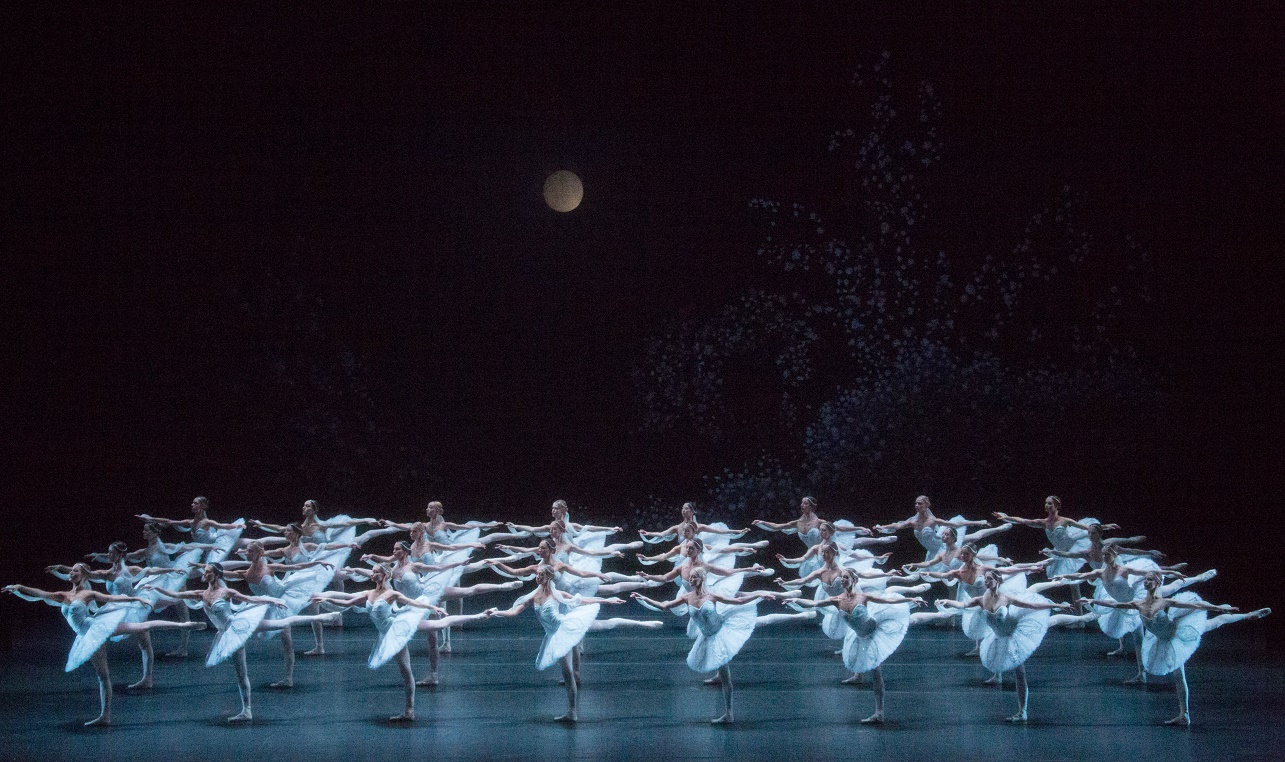 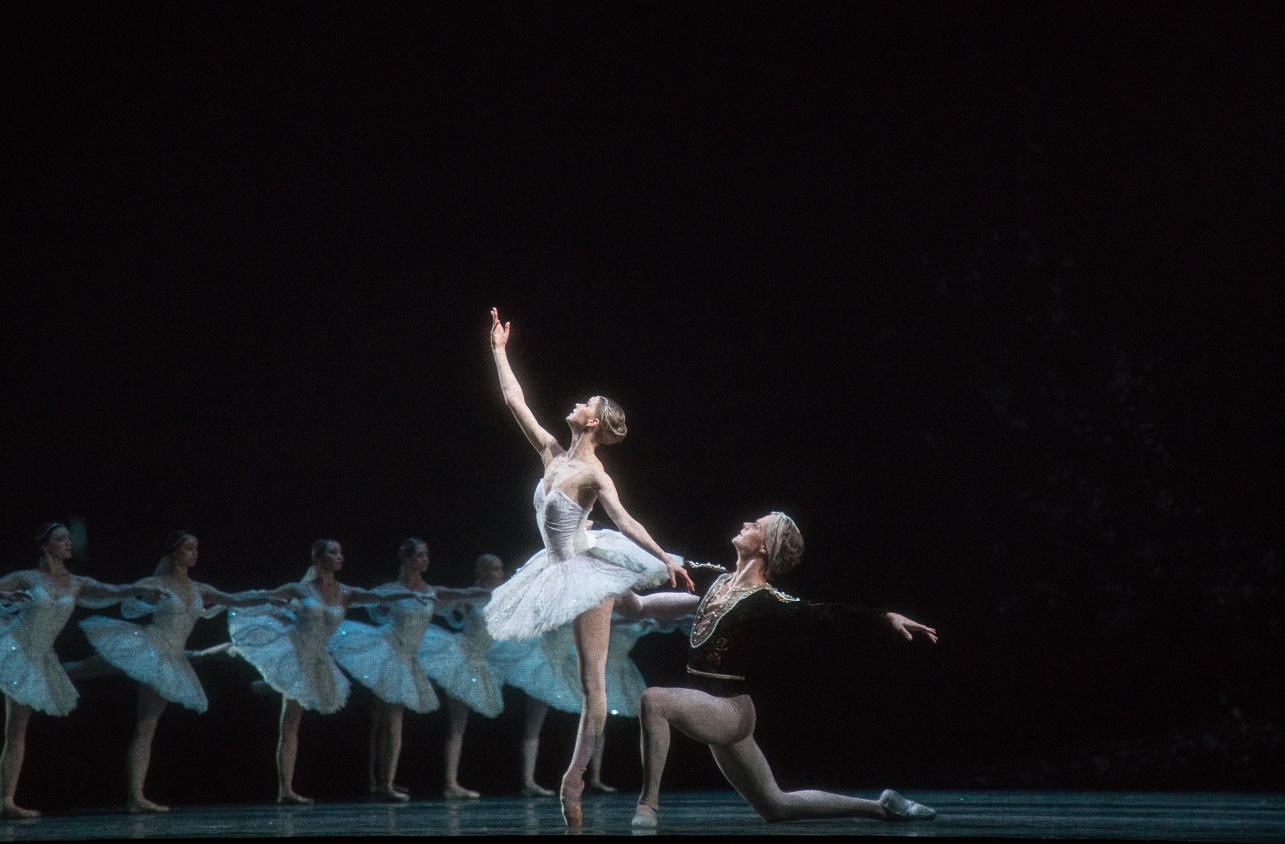 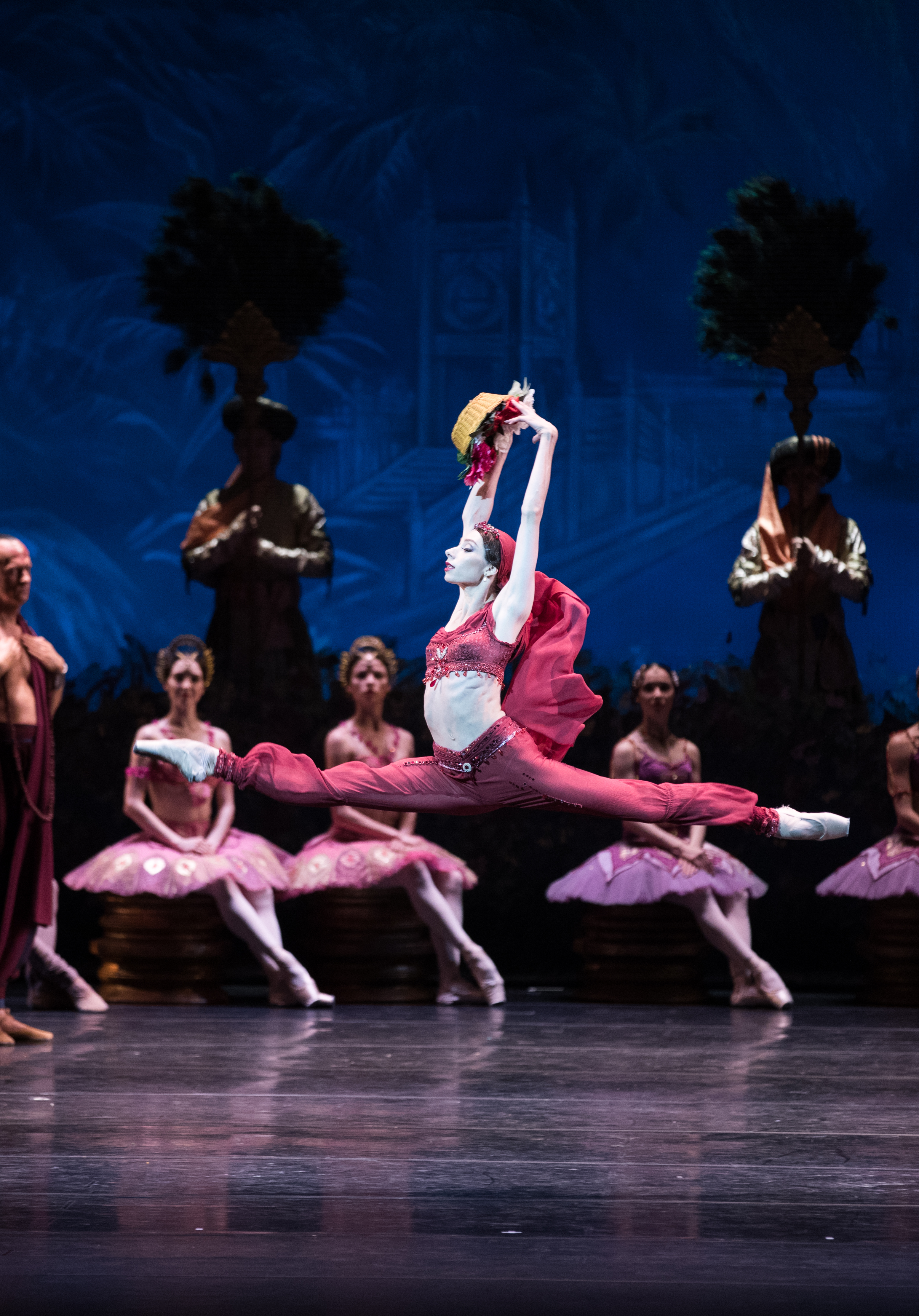 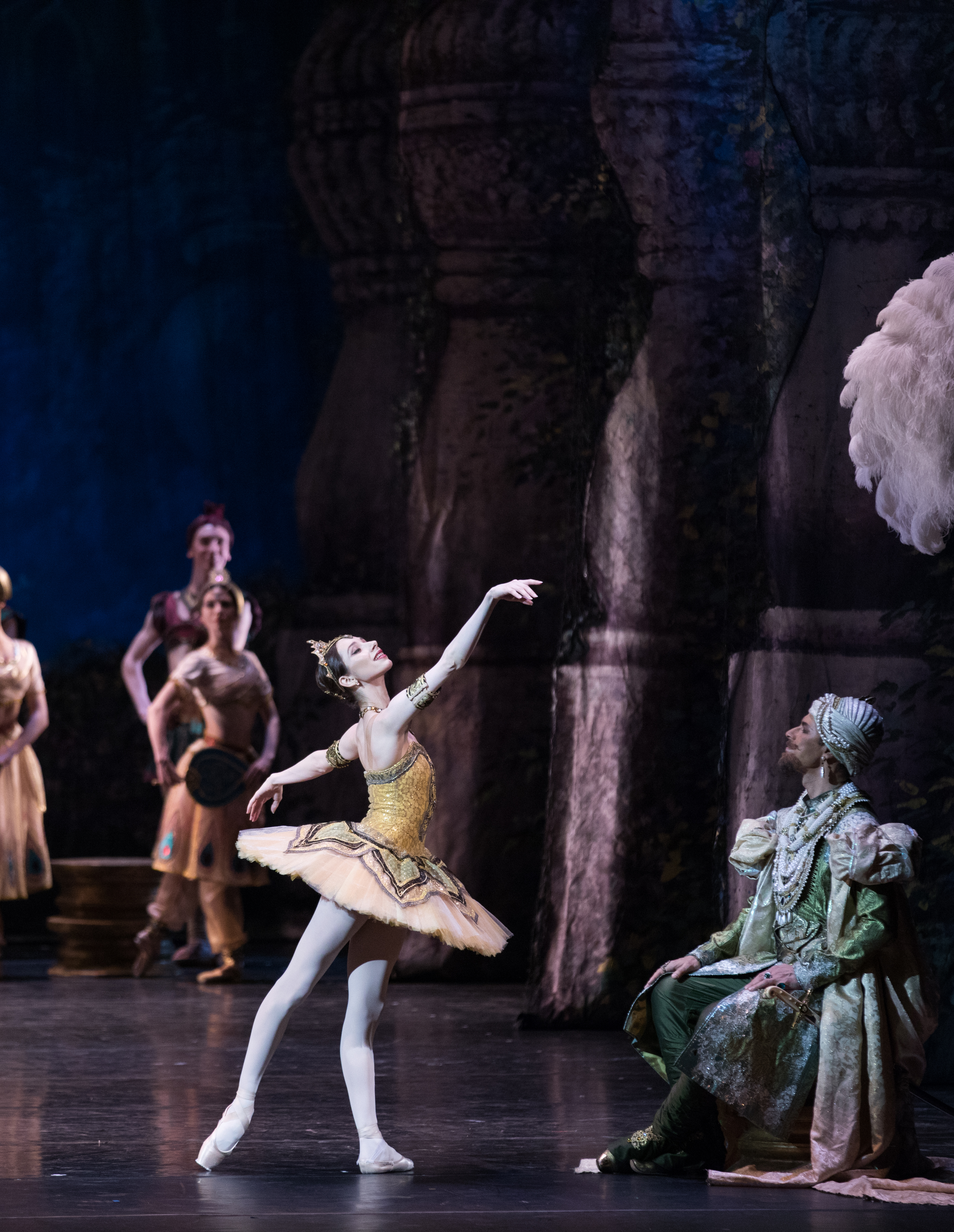 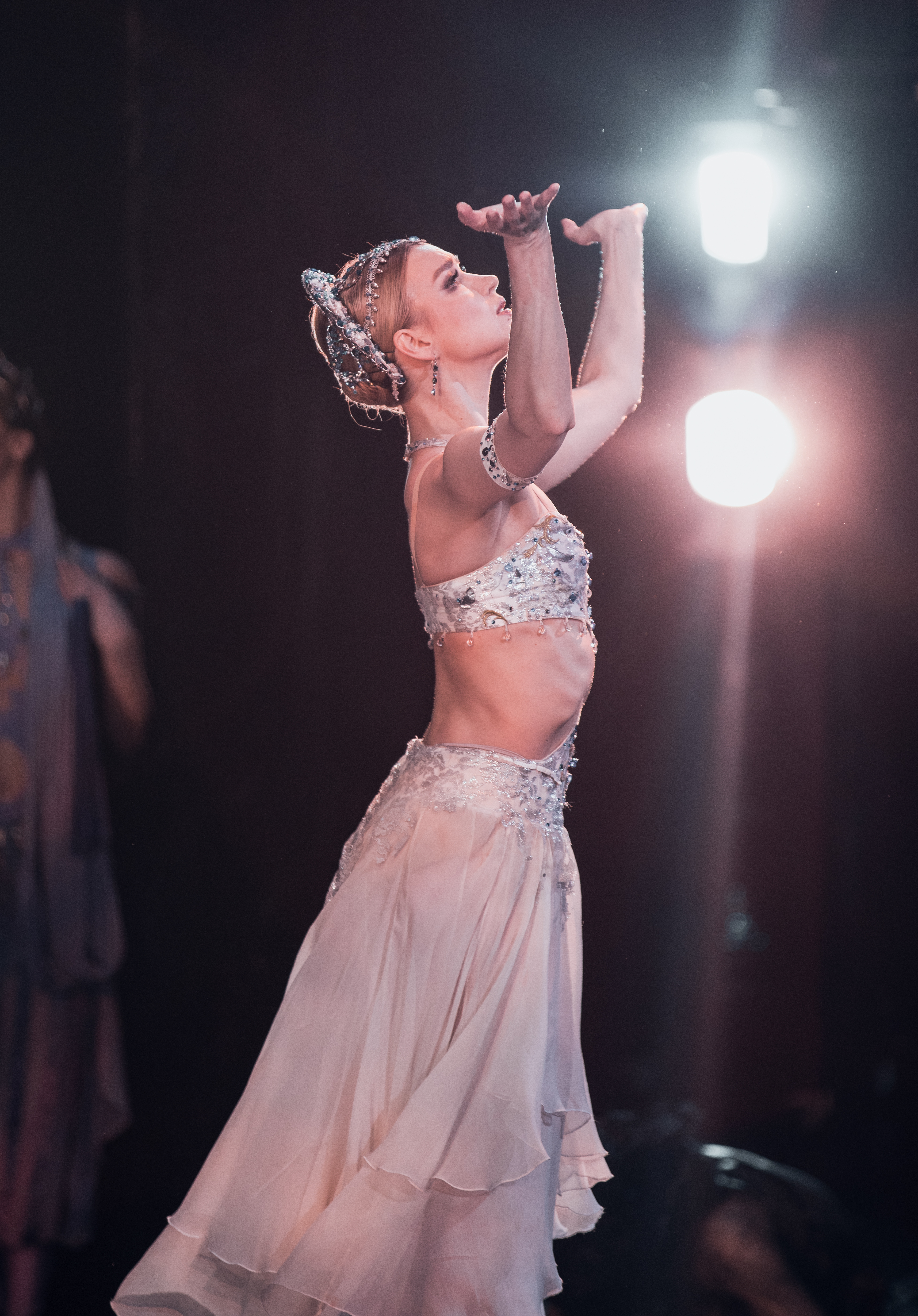 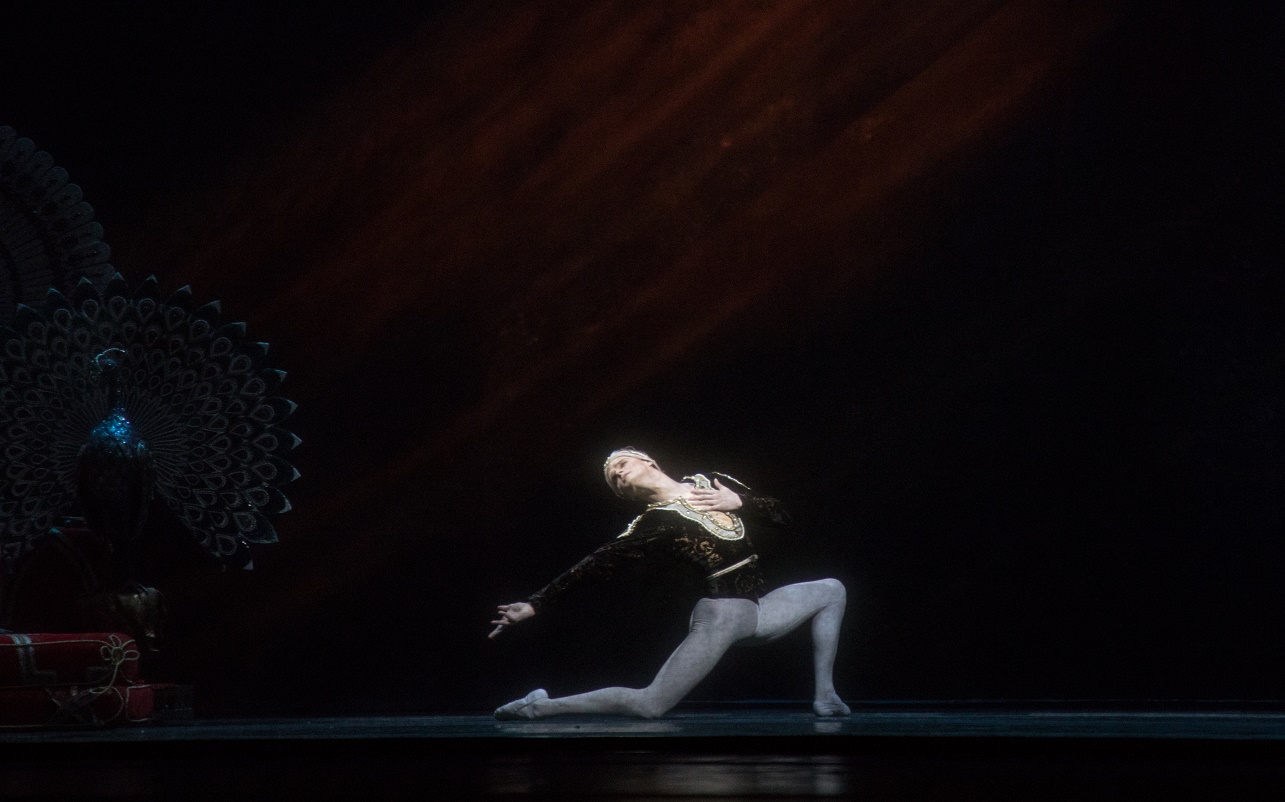 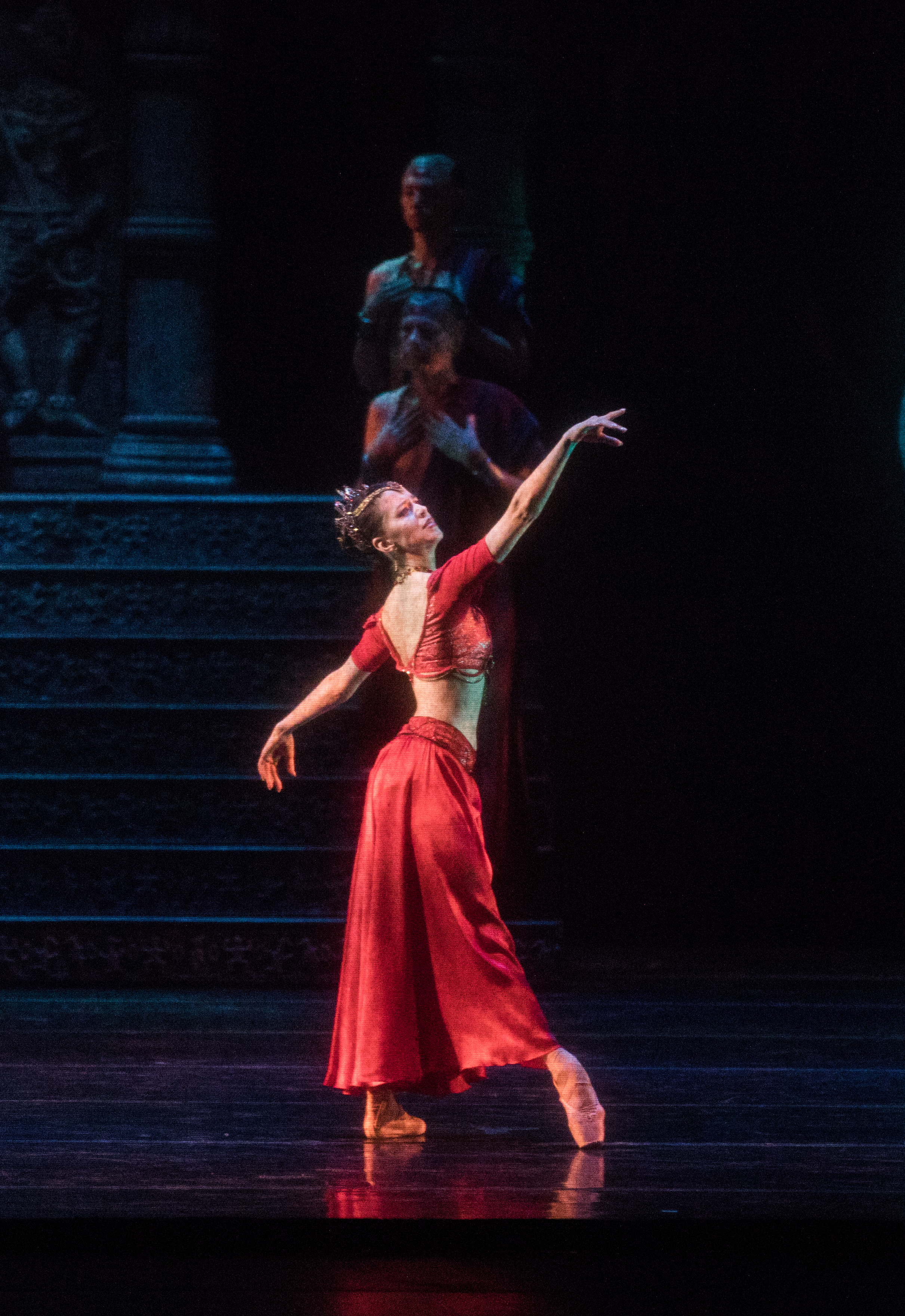 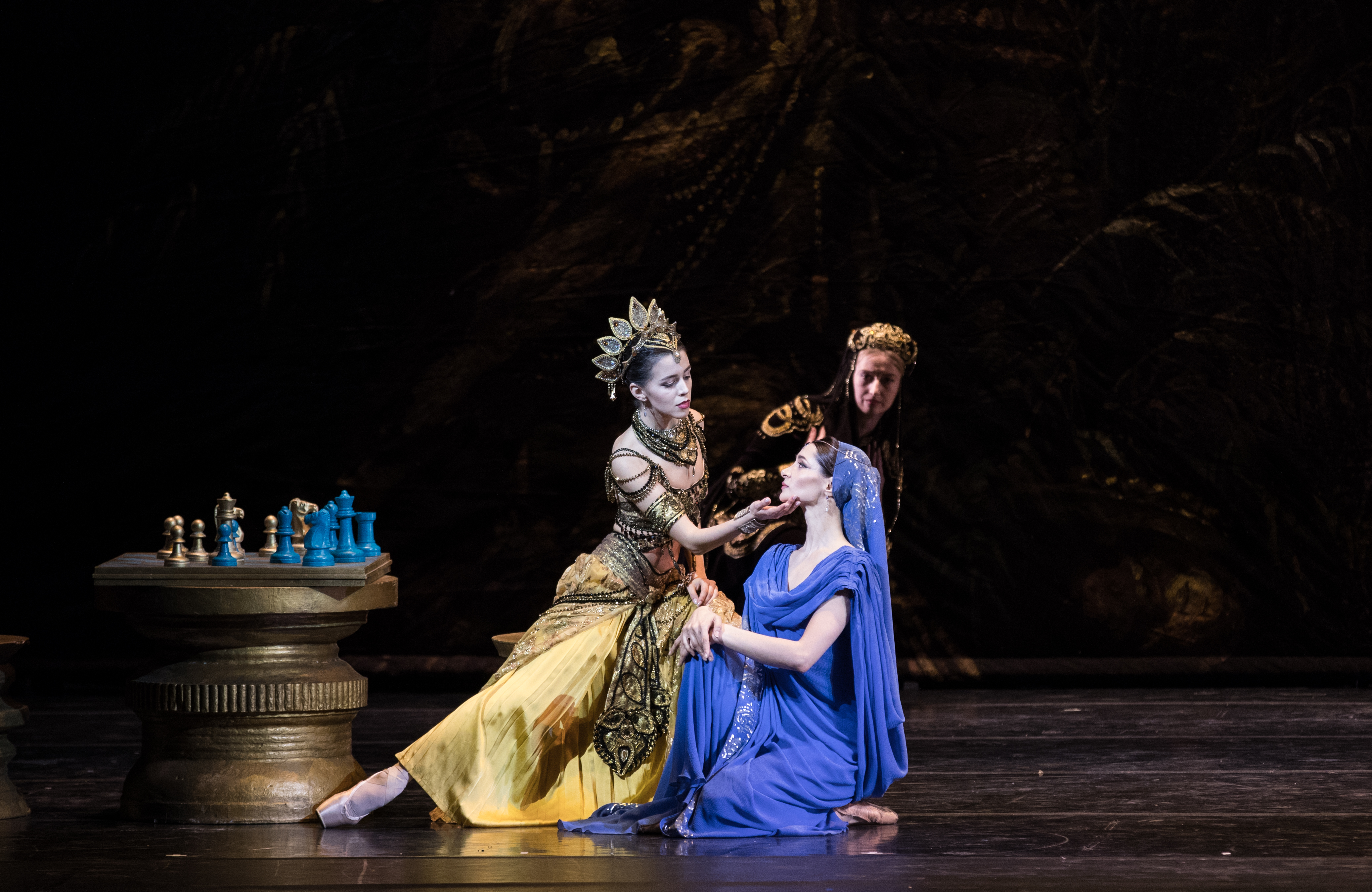