Hugo’s Notre-Dame de Paris. 1482 was transferred to the Russian ballet stage by such choreographers as Jules Perrot, Marius Petipa, Alexander Gorsky, Vladimir Burmeister etc. Today, only the version by Vladimir Burmeister exists without loss of choreographic text. It was created in the most suitable era for such a plot – the era of “drambalet” and, probably, at the most suitable stage for this – the Stanislavsky and Nemirovich-Danchenko Music Theatre.

Burmeister together with Vassily Tikhomirov created a new version of the libretto. To music by Cesare Pugni, orchestrated and ennobled by Reinhold Glière in the 1920s, was added the music by Sergey Vasilenko, specially written for the new version of La Esmeralda. The role of Esmeralda at the premiere in 1950, was performed by the outstanding senior principal Violetta Bovt.

Ballet experts still call Burmeister’s La Esmeralda one of the best examples of “drambalet” . They say about such performances “a jewel of the repertoire”. La Esmeralda is the same sign of the Stanislavsky Ballet, like Chekhov’s plays for the Moscow Art Theatre. It was passed down from one generation to another, from the first-ever performers to the current soloists.

The story of the gypsy girl Esmeralda, full of drama, appears on the stage of the Stanislavsky and Nemirovich-Danchenko Music Theatre to the delight of those for whom ballet is not just a sequence of movements, but a clash of characters, a history of human destinies.

Revival of Set and Costume Design (2009)

PROLOGUE AND ACT I

Gudule enters with a sleeping girl in her arms. Exhausted, she falls asleep. Gypsies find her. Thinking that Gudule is dead, they take the child with them. Gudule wakes up. She sees that the child has disappeared and loses her mind from grief. Feast of jesters takes place on the square in front of Notre Dame de Paris. The “kings” of the French beggars must elect the “pope of jesters” – the ugliest among the participants. They award Quasimodo, the humpbacked bell ringer of the Сathedral. The archdeacon of the cathedral named Claude Frollo accuses Quasimodo of blasphemy. The people are dissatisfied with the appearance of the priest. Quasimodo protects his master. Gypsies flee from the square. Among them is Esmeralda. Claude Frollo keeps an eye on her. In the crowd, Esmeralda sees a mad old woman dressed in rags. This is Gudule. But mother and daughter do not recognize each other. The night is coming. Quasimodo, following the orders of Claude Frollo, is tries to kidnap Esmeralda. At her cry for help, the night guard appears, led by captain Phoebus. Feeling pity for Quasimodo, Esmeralda asks to let him go. As if she was enchanted, she follows with her eyes the departing handsome captain.

Aristocracy celebrates the engagement of the Fleur-de-Lys to the captain of the royal guard Phoebus. In the courtyard, Phoebus sees Esmeralda among the approached gypsies. He orders to let in the gypsy. Esmeralda starts to dance. Phoebus joins the dance. The mistress of the house is outraged. She orders to usher out the uninvited guests. Gypsies dance in the tavern. In a dark corner, hiding from people, sits Quasimodo. Phoebus enters with a group of officers. Phoebus calls for Esmeralda, and she dutifully follows him. Next comes Claude Frollo. Phoebe wants to hug the girl, but he falls, struck down by a dagger blow. Soldiers arrest Esmeralda, suspecting her of attacking the captain. Quasimodo remains in the room. He finds the dagger and realizes that the real culprit is Claude Frollo.

Claude Frollo comes to arrested Esmeralda. He promises her salvation in exchange for love. Esmeralda angrily pushes away the hated man. People gathered to look at Esmeralda’s execution. Claude Frollo offers her life again, but Esmeralda is adamant. She is ready for death. The executioner appears. Quasimodo, knocking him down, grabs Esmeralda and runs into the cathedral. But Claude Frollo gets in his way. He hands Esmeralda
to the executioner. Gudule appears. For a brief moment, her mind is awaken, and she recognizes her daughter in Esmeralda by a talisman hanging on her chest. Gudule tries to save Esmeralda, but the soldiers push her away. On one of the towers of the cathedral sits Quasimodo. Seeing Claude Frollo, he rushes at him and pushes off the edge.. 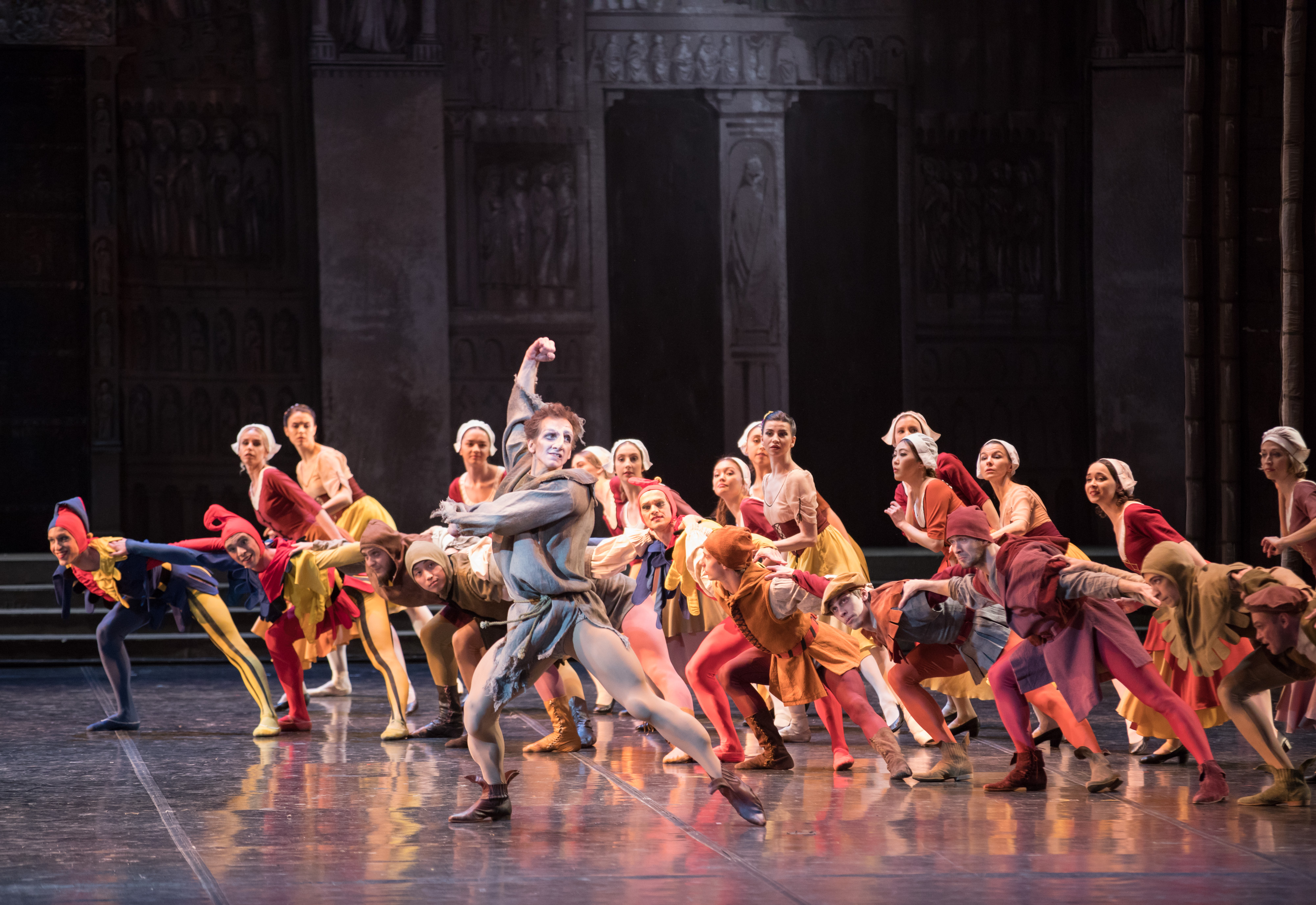 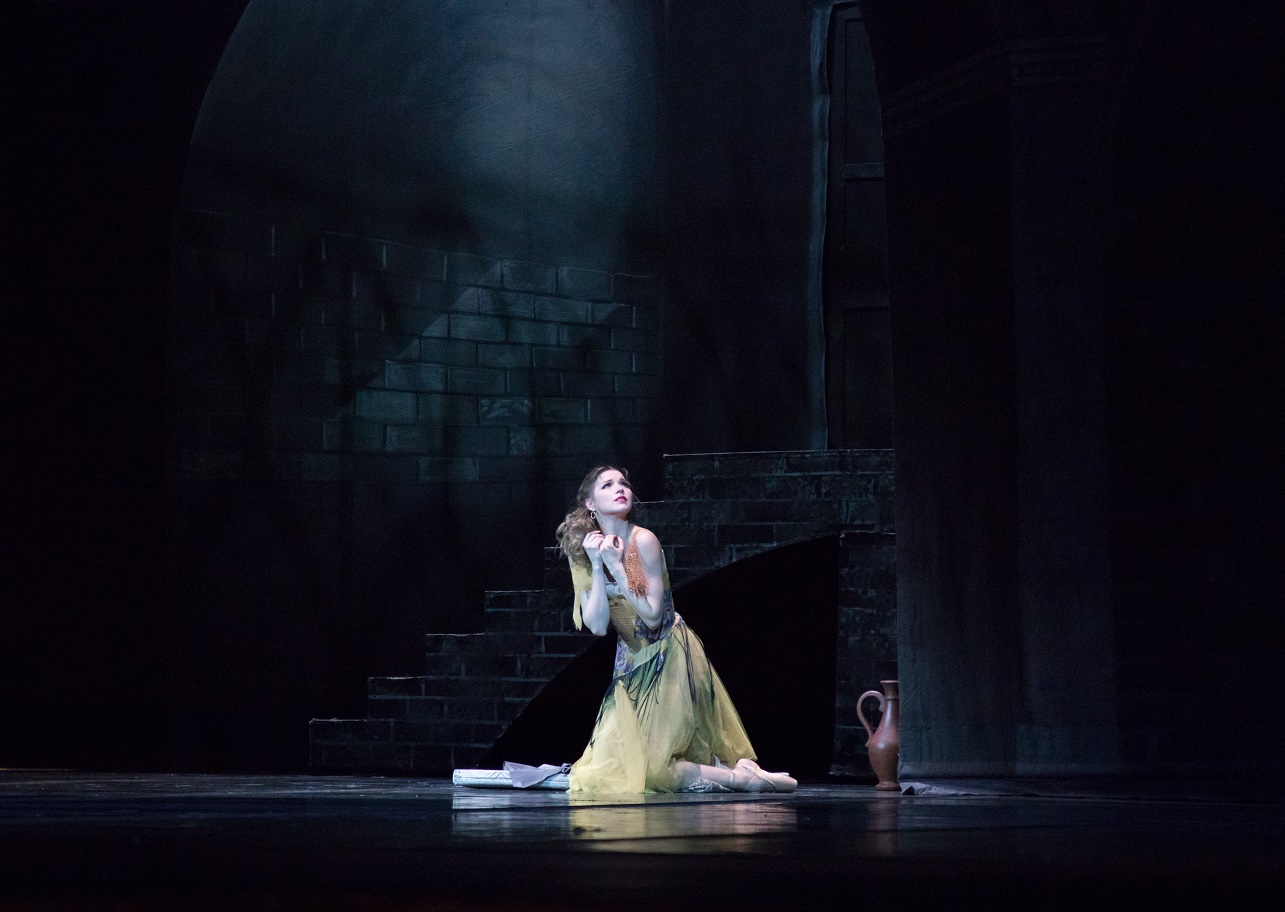 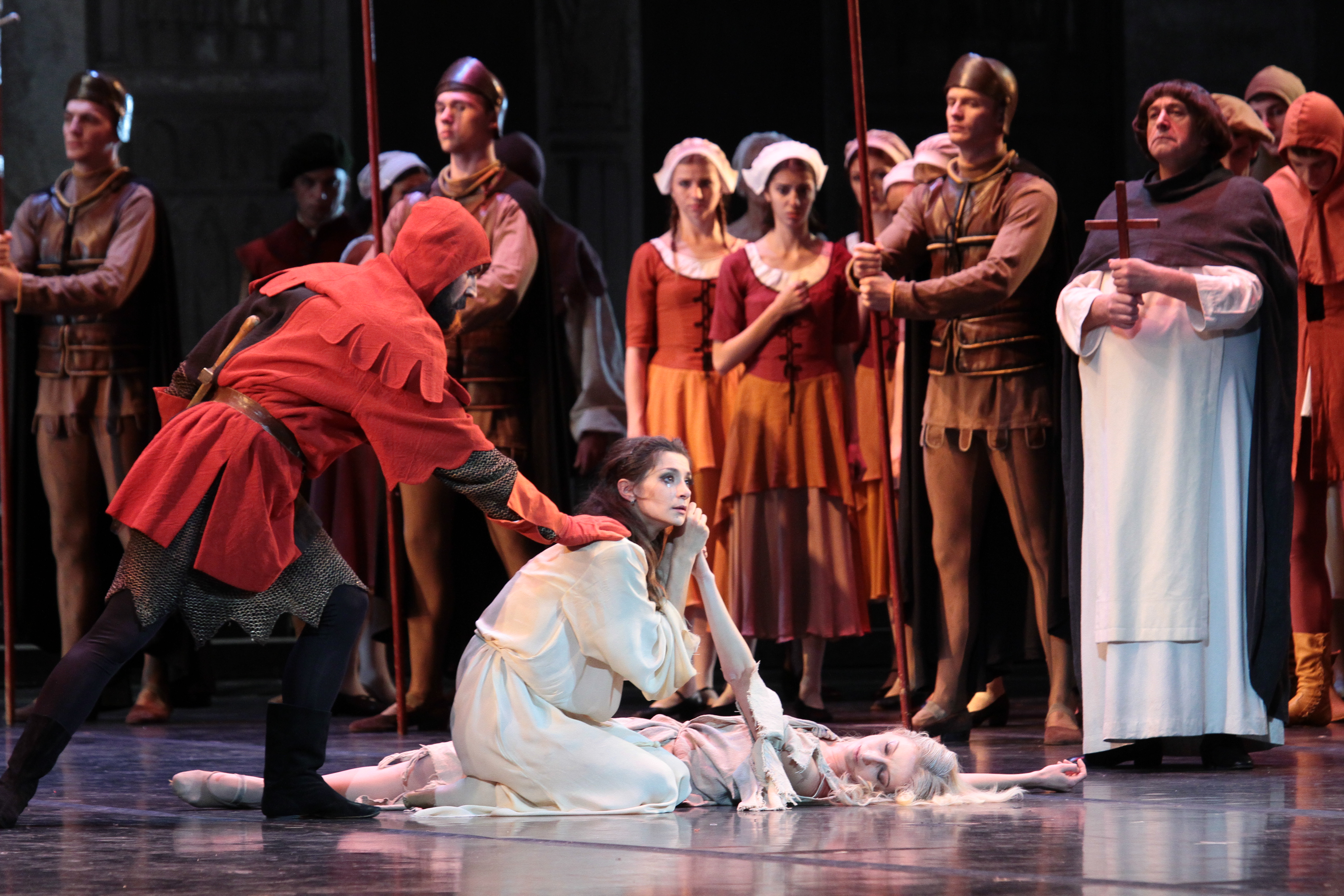 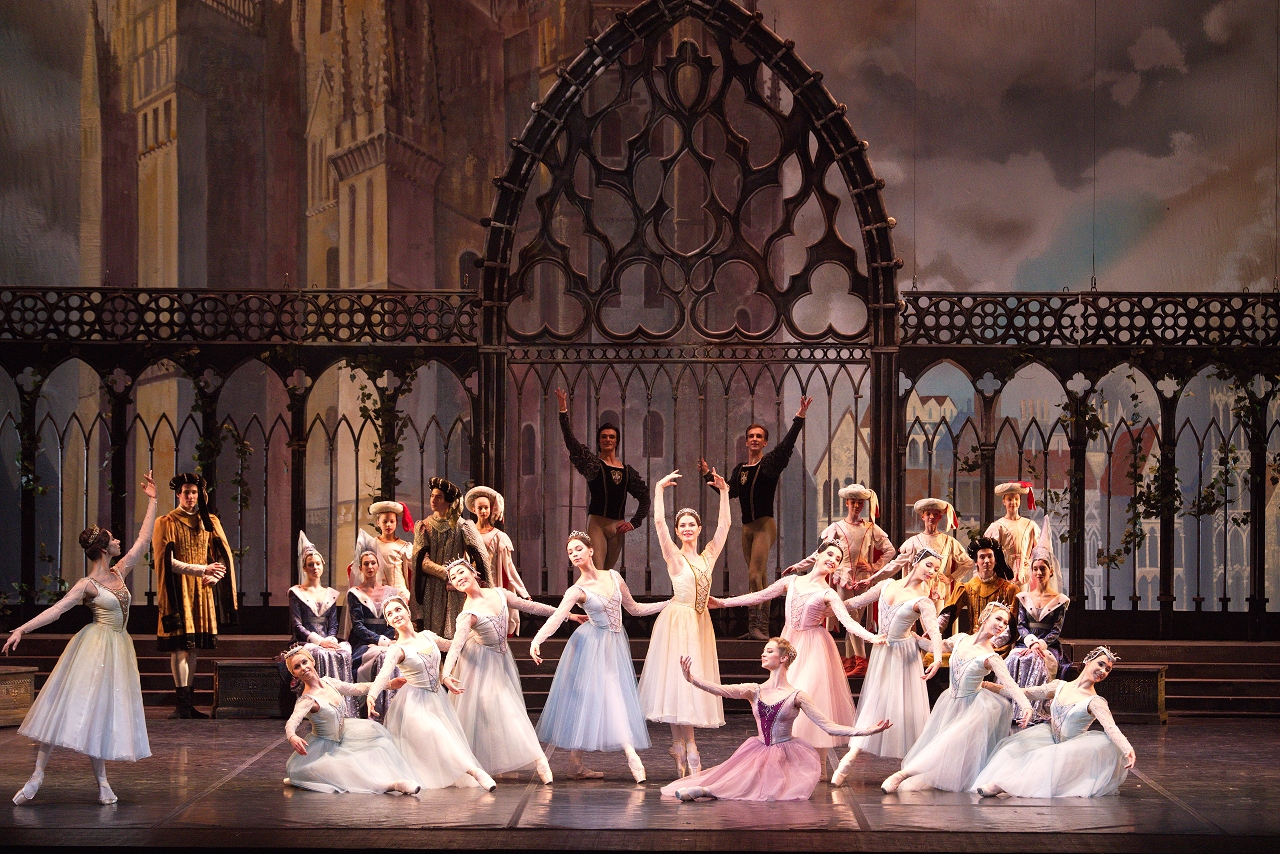 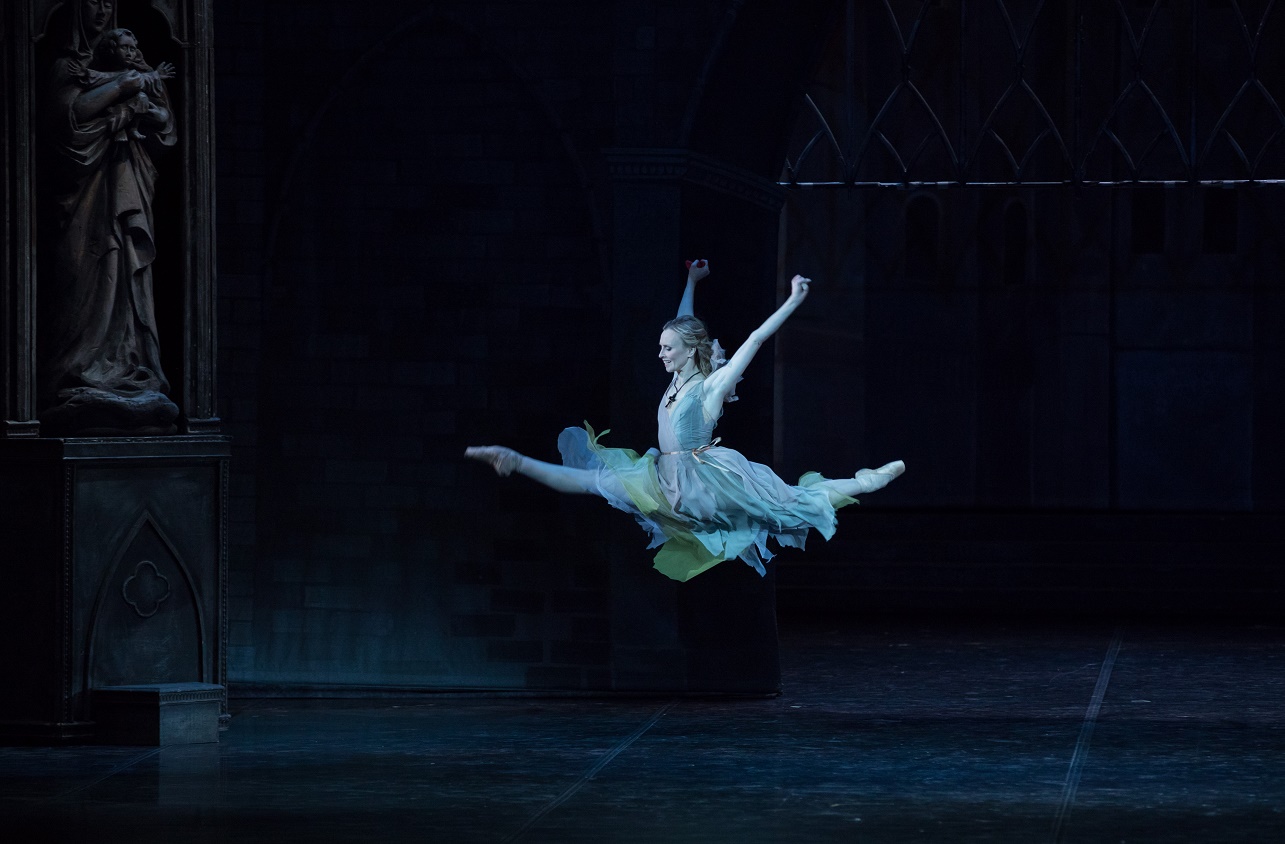